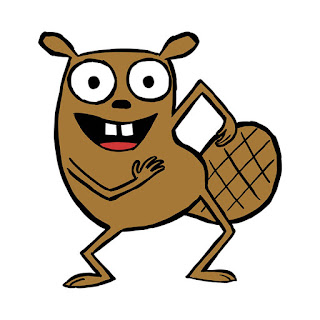 Just a short post to let people know that I've got a new Grickle shirt available for the holiday season! The little dancing beaver from "We Sing the Forest Electric" fame is up on Teespring for a very limited time!

I know, like everyone else, it's always disturbing to have Christmas stuff thrown in our faces immediately following Halloween, but unfortunately if I don't do this campaign right now the shirts wouldn't ship in time for the holidays. So if you're trying to figure out a Grickle gift for any friends or family you've got about a week to order one of these!

I've been doing these Teespring campaigns over the last couple of years as a way of trying to supplement the time and resources I spend on creating original animation for the Grickle Channel. So if you've been enjoying my cartoons over the last decade on Youtube this is a great way to show your support! You can view all the past t-shirt campaigns here! If enough people reorder the older shirts than Teespring does a fresh print run! Have a look!

It's my blog. And that's what a blog's for, right?

This post is primarily about my progress on my obsessive home project of customizing a Stiga Table Hockey set. You can choose to read it or not. Feel free to bail. I won't think any less of you.

For those of you who happen to enjoy the sport of hockey or just like looking at people's odd hobbies please join me!

So earlier I'd mentioned I haven't had a great history with model building. I absolutely love minatures and dioramas but I've never possessed the skills to build them. I just like looking at them.

I knew though that the day my Stiga Stanley Cup Table Hockey game arrived I wanted, no, NEEDED to customize it! Make it my own private shrine to the hockey gods!

Given my checkered past with decals and tiny things I entered into this journey with some trepidation. I really wanted this thing to look cool. I didn't want to eff it all up and be forced into a situation of slamming it into the garbage bin like that X-wing from long ago (see earlier post).

So far, I'm happy to report, that things have been going along relatively smoothly! I've been actually pleased by the results!

I suppose being a middle-aged adult has somewhat afforded me with enough patience and ability to follow instructions that I'm able to clearly out do my younger prepubescent self in the world of models and decals.

When the set first showed up I quickly assembled it. I had chosen to start with the NY Rangers versus the Detroit Red Wings as my beginning matchup. Stiga didn't offer a version that has a Montreal Canadiens team so I chose the least offensive pairing I could find. No disrespect to Rangers and Wings fans out there but these teams would serve as guinea pigs for honing my skills with model paints and decals.

My two sons immediately got into playing with the set! Even my youngest, who so far hasn't shown much love for the sport of hockey, or any sport really, was loving using the puck ejector and doing spinning slappers on it. After a couple of days of playing I shut the whole thing down. It was time to customize!

My boys were not pleased.

One of my co-workers has started calling me President Business (ala the Lego Movie). And I guess it's not far from the truth right now. But dammit this was MY set and I had to get started on making it a mind blowing display of hockey awesomeness! They'll thank me in later years. I'm sure of it.

The first thing to be done and honestly the toughest step I've taken so far was to evenly paint the top of the rink boards red. I'd looked on the internet for reference and also remembered a lot of arenas I've played in, and red on top of the boards is a common color you see. Some places are blue and others yellow but red seemed like the right vibe to me. So I proceeded to take everything off the board and completely tape the whole set off. Just leaving the top of the rink boards exposed. It took me FOREVER to properly tape it up. I blew a whole Sunday afternoon on this step. Out in the back yard I laid it down on some plastic tarp and began spray painting as my family silently looked on from the window. At first the red looked a bit pink to me and I began to get nervous I'd already screwed up the project. But, after a night of drying in the garage, I was relieved to see it was a perfectly vibrant red and my taping job had been quite effective.

I stupidly didn't take any photos during this beginning phase. I wished I had. It took so long to get that thing taped up that I completely spaced on the notion of recording the event. I was too eager to just get painting. I wouldn't make that mistake again.

The next thing to do was begin experimenting with decals on the players. I should mention that I found an amazing resource on the internet, a website, called "Table Hockey Heaven." The forums there have been an infinite source of inspiration and information on what to do with this set! I carefully followed the decal instructions suggested and began to put numbers and names on my Detroit team. 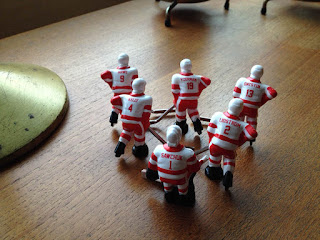 I measured what I thought would be the proper sizes for the numbers and names on the jerseys. The decals were so TINY! That actually turned out to be a good thing for my first foray into it. I've discovered that the bigger the decal the trickier it is applying it and getting it to lay flat. I was so glad I'd invested in a pair of really good tweezers for this! Made all the difference in accurately placing the names and numbers.

For Detroit, and I think for all the teams I assemble going forward, I'm kind of creating a "greatest hits" version. Regardless of era, I'm putting together an all-star team for each franchise. So for Detroit I've got Gordie Howe playing alongside Stevie Y and Pavel Datsyuk. Some choices are tough to make. I probably could have put Ted Lindsay in there but I will admit that I make some of my decisions based on personal nostalgia. There's no way I'm making a Red Wings team without Yzerman playing.

Next I needed to clean all the cheapie factory-made stickers on the boards and outside off. That took a bunch of nights of using water and "Goo be Gone" to get everything cleaned.

I then carefully taped off the boards and extended the red line and blue lines up the sides. 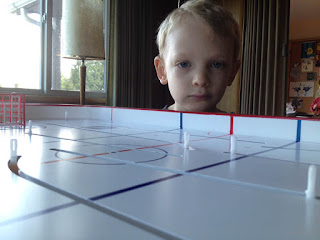 My son asks every day "When can we PLAY the game again, Poppa?" Patience, son, patience.

One of the funnest elements of customizing this set has been scouring the internet for obscure logos to put on the outside of the boards. I'm choosing logos based entirely on my personal tastes. There's no discernible rhyme or reason to any of it for anyone else. I'm lumping Junior A teams alongside cool WHA logos and defunct NHL teams purely for the aesthetic zeal of it all. And because they're logos I've grown up with. The Greyhounds were the local junior team in my hometown, the Nordiques were the greatest rivals of my beloved Habs during the 80's, the Portland Buckeroos were an incredible Oregon team based here in the 60's and 70's. I love all the individual histories they represent to me. Plus they look cool. 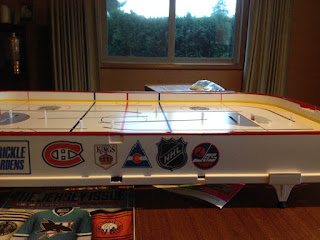 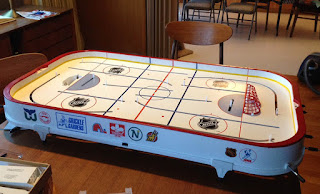 I needed a name for the rink. After many iterations in my head I settled upon "Grickle Gardens". It had the right old school flavor to it and I instantly knew of a logo I could create! I subverted the classic Johnny Canuck image by adding a Gricklized head and made sure to retain the toque, eh. Perfect. 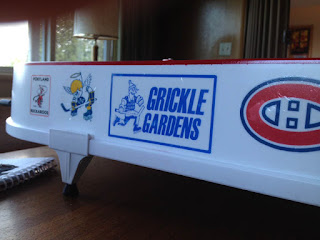 And that about brings you up to date on my progress. I've begun printing out names and numbers for the opposing Rangers team. AND I'm about to begin sanding and painting the Rangers goalie which is VERY exciting to me. As much as I've been creating an all-star team for each city I've gone with John Davidson for my Rangers goalie. Not necessarily the best NY goalie of all time but definitely the coolest looking netminder they ever had. 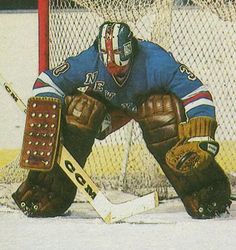 I mean look at that mask! I hope I'm able to do it justice painting so damn small.

Look for another update in a few months or so! :)