I was mulling over what to write this week and I as I started sifting through past memories and events I came upon one that I'm sure most others in my profession can relate to. 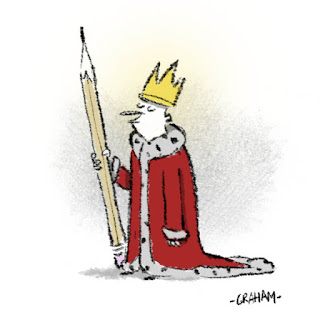 Being the best drawer.

For a good chunk of time I believe I held that title in my Northern Ontario elementary school. A solid run from about Grade 2 to Grade 8. I don't think I was cocky about it, but I sure did like having a 'thing' that set me apart from others.

It first dawned on me that I held this crown when I got my turn as student of the week in Grade 2. Each week our teacher would arbitrarily pick someone in the class as 'Student of the week'. This meant a small photo of you was pasted onto colored construction paper and then everyone in the class would write something nice about you around the photo. It was then pinned up on a board for all to see for the entire week.

When my turn happened I was surprised to see that nearly every comment was the same. "Best drawer". "Good at drawing", "I like his drawings", "He's good at drawing dinosaurs", "Excellent drawer", etc.

That was the moment I realized I might be the best drawer.

It was a good feeling. And as much as I didn't like a lot of attention, I did enjoy my drawings getting attention. My focus at that time was mostly reptile in nature. I got pretty good at drawing snakes, particularly rattlesnakes and cobras. I always remembered to put those markings on the back of the hood of the cobra and I was very meticulous in drawing each segment of the rattle on the rattlesnake. I also did my fair share of dinosaurs. Usually that epic battle scene between triceratops and the mighty tyrannosaurus rex that was so popular in the late 1970's.

As I grew a bit older I expanded my skills into rendering Spider-Man swinging through mostly blank space (I really hated drawing buildings, still do) and NHL goalies making all variety of dramatic saves. I remember being so stoked when I submitted a Red Wings goalie stacking the pads to the local paper and it was actually printed in the "Kid's space" section the following week! My name and grade school were printed right below it. Further proof that I was indeed the best drawer.

As I mentioned earlier I never felt I got a swelled head about the whole thing but I will admit I got fairly comfortable with being the 'best' when it came to drawing. It was just what happened whenever I touched pencil to paper. The best. No big deal, just nature taking its course.

My parents took my sister and I over to friends who lived on the other side of town. Their son was a year older than me. We didn't see each other that often but when we did we always got along well. He was a super interesting and crazy smart kid. Back when most kids hoarded Star Wars action figures, he had all these elaborate historical toys, figurines of classic knights and conquerors of the past. And he actually knew all the context behind them. Super smart guy. We'd usually just hang out in his room and get up to weird stuff like putting models together while listening to music on his stereo (he had his OWN stereo at the age of 10!). Sometimes we'd eat dog food. He convinced me that it actually tasted awesome and so we'd share a batch in his room that he'd snuck from the downstairs kitchen. His parents must have always been confused at why their dog went through food so quickly.

But this particular visit we didn't hang out in his room. Instead he invited me over to a nearby buddy's house to go do some drawing. My parents gave me the okay so we headed out.

When we got there I was greeted by another kid who was a year or two older than me and he seemed equally odd and smart like my friend. I still remember him looking a little chubby in a striped shirt and beckoning us in. Soon we were downstairs at a table, listening to music and enjoying some soda. There was a stack of blank paper and pencils ready to go. My friend and his buddy seemed very methodical about their drawing time and stated that we were going to be spending the afternoon illustrating airplanes. Specifically World War 1 era planes. I was a little confused by the exactness of our drawing mission. Usually when I drew there wasn't an outlined agenda that needed to be adhered to. If I was in a dinosaur mood I'd starting cranking out triceratops or get a little crazy and maybe pull out a stegosaurus. If it felt like more of a hockey type day I'd whip up a Tony Espo or Ken Dryden saving the game in overtime. Never before had I been with kids who organized drawing time in such a rigid fashion. "Oh well" I thought, this shouldn't be a big deal. I can draw some planes with these guys. It'll be cool. Something different for the best drawer to try his hand at.

So for the next 10 minutes the room fell into silence as we all began drawing our WW 1 airplanes. I noticed the other two had flipped open some reference books as they worked on their renditions. I wasn't much for reference at the time. I liked to just wing it. It was a more freeing feeling to just come up with the image that was cooking in my head instead of weighing it down by sticking to some pre-drawn image that was in front of me. I mean what's the sense of doing someone else's drawing, right? It's already been drawn by someone else, why make another one?

I started with a propeller first and then began drawing the body of the plane. I really didn't know anything about World War 1. I kind of suspected that Snoopy had been involved in it? I was pretty sure he'd mentioned World War 1 when he was fighting that Red Barn or Baron guy in Peanuts? That's about all the info I had to go on. So I added some wings and tried to draw a little pilot guy steering it. I will admit it was kind of a weird looking plane. And you'd be hard pressed to say what era it was from. But it looked pretty plane-like to me and creative, so I felt it was impressive enough to stand on its own merits.

As we all slid our finished drawings to the middle of the table for a little art review, I didn't feel any sort of anxiety at all. I was always the best drawer and nature would take it's usual path.

My blood froze when I saw the other two drawings.

The detail they'd both put into their planes! The linework and sophisticated design. The accuracy of the dimensions. Their drawings looked like they belonged in a professional history book on airplanes! They were perfect!

My strange lumpy airplaney vehicle stood out like an abomination beside their shining examples of wartime flight of the early 20th century.

There was a brief moment of silence as we all took it in. Then the laughing began. I don't think they intended it maliciously at all. It was just the utter shock of seeing my contribution relative to theirs. The complete unexpectedness of it. If I hadn't been so thrown off by this appalling reversal of nature I suppose I might have found the humor in it as well. But instead I felt for the first time ever, total shame and humiliation in my drawing abilities. I couldn't hang with these guys and their specific World War 1 era drawing skills. I was not the best drawer. Not by a long shot.

That was a tough but good life lesson. I realized, with some amount of pain, that I had been a big ignorant fish in a very small pond of other fish who mostly didn't bother drawing. And outside of that pond was a large ocean that contained highly skilled creatures who very much did like to draw and were quite adept at it.

It was good to know this and be aware of this.

I think it allowed me to survive art college and weather a career in animation.

As harrowing as that experience was I never did falter in my drawing. I enjoyed doing it too much. I continued to stick with dinosaurs, Spider-Man, and goalies and eventually into heavy metal covers and comic characters of my own creation.

But I will admit it was a long time before I tried my hand again at drawing a bi-plane or any plane for that matter.

I'm sure many of you who were former or are currently the 'best drawers' can relate.

Oh! I wanted to mention that I've strung together all my early Monkey Scream cartoons on the Grickle Channel. The resolution is better than in the original uploads from years past and I added in a little special Monkey Intermission bit to help spice it up (and to provide a slight reprieve from the onslaught of monkey screams.) Enjoy!

Posted by grickleguy at 9:25 AM

Thanks for sticking with it, Graham. Any decent artist can whip up a WWI biplane, but it takes a special something to conjure up hidden people and skeletal principals. :)

Yep, that sounds like a hard lesson to learn. But luckily you didn't give up drawing after this.
I used to be "the best drawer" in my schools but had a different hard lesson to learn, that is to say that drawing best doesn't give you friendship even if you don't brag about your skills.

When I read about you drawing snakes and your friends drawing planes...I suggest you should have drawn snakes on a (their) plane :))

And drawing planes and other machines it's awesome but in the end (to me at least) what counts is style. Whatever you can draw, either if it's people, animals or objects: if people tell "YOU did this, I recognize your style here" it's worth a lot, I think. And if they like your style they forgive the fact that you can draw one thing not as well as another.