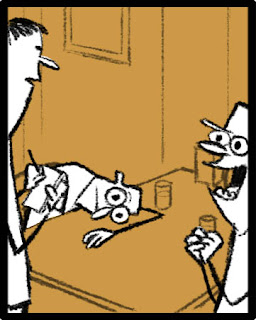 I've started up a weekly comic strip on the Telltale Games website! It's called "Dunk" and it involves a comic strip artist named Dunkin who draws a strip called "Dank." There's a twist here though. I've been doing an actual "Dank" strip on the Telltale site for nearly two years previous. It's kind of like pulling the curtain back and seeing the creator beneath the creation. Go and have a look here. Once a week, every week.
Posted by grickleguy at 10:32 AM 6 comments: