It felt great to finally release a new Grickle cartoon last week! The thrill of uploading something new never gets old! It tickles that exact perfect spot on your ego or whatever. It's the whole reason to do art I suppose. At least for me. Make something and get a reaction. Simple.

But I will admit it is a brief sensation. And in this day and age even more incredibly brief than its ever been on the internet.

Back in the old days, like 2007 to 2009 or so, when I uploaded a new cartoon the aftermath of reaction would flow for a good long while. Like throwing a rock in a calm lake and watching the ripples go outward. Nowadays launching a cartoon feels more akin to tossing a pebble into a stormy sea. If you look really carefully you might see the pebble hit the ocean surface. Then it's gone. It's still super satisfying to chuck that rock but it just doesn't last long.

I'm guessing that everyone, myself included, has such an overwhelming input of tweets, posts, updates, etc., in their various feeds that every new blurb gets pushed downstream so fast that if you blink you miss it.

Or maybe I should say vive la nouveau?

As I edge closer to being a legitimate 'old man', I find it increasingly tricky to keep up out there. When I look over all the newer avenues of social media my heart begins to race oddly, my palms get sweaty, my breath becomes short, and I get this overwhelming feeling of not doing enough and being hopelessly behind the times. 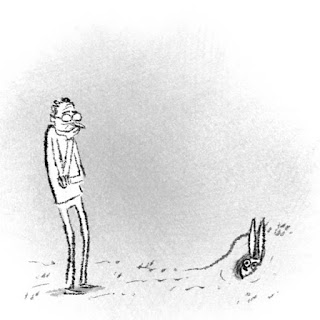 Truly an old man staring down at the rabbit hole of the internet. Or chasing the dragon of cyberspace. Or something like that.

But like all those people who watch Youtube videos of folks unwrapping presents, I can't deny that desire to see something new! Capitalism and consumerism at its worst. The excitement of trying a new app out and successfully posting in unknown territory belies the fear and anxiety. Not to mention the pathetic 'old guy' bragging rights of saying to peers "Really? You don't have an account on there? Oh yeah, I've been using that app for years now!"

Some new arenas (to me) I've stumbled around in recently are Instagram, Tumblr, Google+, and Vine.

For the Instagram and Tumblr accounts I've been posting a morning doodle every day. It's been a healthy drawing exercise if nothing else. The audience is slowly growing so we'll see what the future holds. I'm going to try and keep it up for as long as I can.

I also took a stab at updating and using my Google+ page. It's been fun to tinker on it but I really get the feeling not a ton of people use Google+ on a daily basis? Maybe I'm wrong. I'm going to continue tinkering on it regardless. If you're interested in following any of these new venues, here are my accounts:

The Vine account is a slightly different beast. I've had one for quite some time but frankly could never get my head around it.

Until last week, that is!

I had an inspiring conversation with an animator friend, Kevin Parry (you should really follow his amazing stuff on Vine!) and now I'm so excited about it I'm trying to keep myself from spending all my free time there! The concept of doing little 6 second shorts is so compelling and not dissimilar from the early days of the monkey scream shorts on the Grickle Channel. It's definitely stoked the creative fires!


I've got more ideas than I can handle for it but I'm going to try and exhibit some restraint. If you want to keep an eye on those proceedings look no further than here:

That's as far as I've managed to chase the rabbit/dragon currently.

I would love to hear from folks if they thought there was an app or place I was sorely overlooking for Grickle stuff! I just want to make sure that when I create a new piece of art, be it a sketch or animated short, that I'm really posting it in the most appropriate places to be seen and appreciated/hated these days.

Make something, get a reaction.

"After hours" has arrived!

As of this morning there is a brand NEW Grickle cartoon uploaded exclusively on the Grickle Channel!

It has been a looooooong road to get back to this point. And I'm very thankful that so many of you held onto your Grickle Channel subscriptions on Youtube. As I uploaded this latest cartoon I realized it's the 50th animated short I've put on Youtube. 50 shorts! That's a decent amount of animation! Put all those together and that's pretty much a feature length film done by one person! A strange, disjointed, sparsely-animated, feature but a feature nonetheless!

That's the sound of me tooting my own horn. Just briefly. I feel like some sort of sound has to commemorate getting half way to 100!

Please enjoy this latest installment and comfort yourself with the knowledge that I plan to be uploading plenty more new cartoons in the coming year. The Grickle Channel is back on track for the foreseeable future!

And, as this is the internet, and I am one solitary fool making these things in my spare time, I feel obligated to again make mention of the new Fan Funding feature on my Youtube page.  If you've been a fan for a long time or just discovered my work and want to contribute in making the foreseeable Grickle future even more of a reality at a quicker more dependable pace then please contribute to my Fan Funding button on the Grickle Channel page! Any amount helps in allowing me to schedule more time working on the cartoons, purchasing sound efx and software. It's the blue button on the main Grickle Channel page!

Okay! That's all I'm going to say about that today! Looking very forward to hearing comments on "After hours"!

Alright, I'll shut up now and get back to making more! 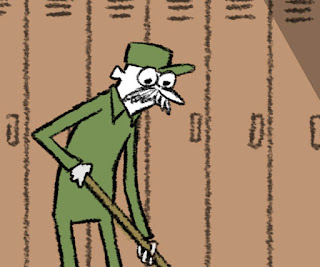 The above image is a sneak peek of the upcoming "After hours" cartoon I'll be debuting exclusively on the Grickle Channel this coming Monday the 13th!

I am so excited.

This is hopefully just the tip of the iceberg. I've been dying to get back to revitalizing the Grickle Channel and I can't wait share the bizarre ideas I've been concocting over that last couple of years.

If you've checked out the Grickle Channel page in recent times you'll notice that there is a "Fan Funding" button on there now. It's on the main page and looks like this: 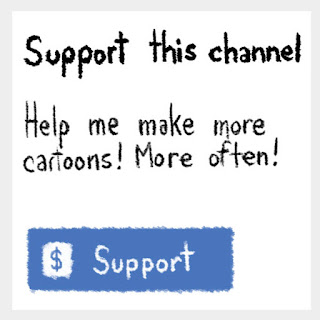 I'm not about to start charging everyone for the cartoons BUT I do want to say that I  will welcome any financial help I can get in paying for sound efx, work time, and software purchases that I make for the Grickle Channel. I'm pretty darn sure I'm going to continue making these cartoons for as long as I exist. I can't help myself.  I absolutely love doing it and it feels like one of the few venues I've got where I completely and utterly am able to express myself without any filter of any kind. So funding or not I'll continue to make these animated babies whenever and however I can. BUT financial assistance, as in all things, helps justify and create more opportunities to devote more time to the channel. More financial support = more cartoons, more often. So if you feel like helping out the Grickle Channel and contributing to it's current existence, glorious past and hopefully bright and weird future than by all means I welcome your support!

Either way I'll be making more. It's just I may be able to make them quicker and more often with assistance from all you awesome people.

Okay! Try and enjoy your weekend and remember to be watching the Grickle Channel on Monday the 13th!!!

Portland is hot and the Grickle Channel LIVES AGAIN!!!!

I knew this day would come. And that it would come quickly. In the pursuit of creating blog posts on a regular basis I'd have to confront the dilemma of having no obvious thing to write about. I'd be yet another person adding to the infernal white noise of the internet by writing about the fact that I have nothing to write about today.

But I also knew that I was going to adopt a more cavalier attitude towards this blog and just not sweat it if I found myself in a topic-less kind of mood.

Well today is that day, but that's okay. I'm going to forge ahead and write something anyway. And maybe add a doodle or two to spruce up the piece. Something like this: 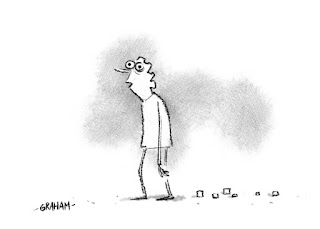 What's that drawing about? I dunno. His head is made of ice cubes. Or something. Speaking of ice cubes. Portland has been insanely hot.

And it's lasted way longer than usual. To the point where whatever reserve of energy I normally have to do extra things has been greatly depleted. Some guy on the radio this morning said that there is a gigantic 'blob' in the ocean of slightly warmer water that is the cause of all this. Scientists can't explain how it got there but the 'blob' stretches thousands of miles from Alaska to Mexico and is heating up the West Coast. Great. 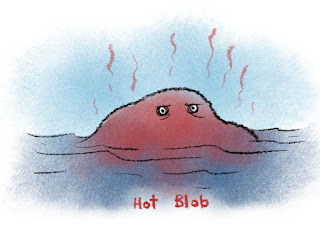 Hot weather makes me feel like I'm running on empty.

One of those extra things that I've lost some energy in working on is Grickle cartoons. I'm sure many of you noticed the almost total lack of new cartoons on my Youtube channel for the last 2 years. It made me sad but I didn't really have a choice on the matter. Between being the father of two great little boys and trying to do the best I could in directing an animated feature film I lost all ability to find time to create more Grickle cartoons. Until now. Things have changed. Time has moved on. The Boxtrolls is completely and utterly done. My boys have gotten a little older. And so I've been quietly working away on a number of new animated shorts that I can't wait to begin posting!

Although this weather has painfully slowed me down for the last week or two, don't fret! I made decent progress back when the days were cooler and I've got one brand spanking new cartoon ready to be uploaded next Monday morning (July 13th). Keep your eyes peeled for it and tell your friends! Spread the word! The Grickle Channel lives yet again!

Well, there. I guess I did have some stuff to write about after all.

Until next time! Stay cool out there, everyone.

Posted by grickleguy at 12:08 PM No comments: