I've created a Grickle Patreon Page! It's been a long time coming! Over the last year or so I've been quietly weighing the options of how best to fund my ongoing efforts in the Grickle Channel and Patreon seemed like the smartest option!

I've really struggled with how to properly monetize Grickle. Initially I'd been considering a Kickstarter campaign but the more I researched it it felt like the wrong structure for what I was doing. I plan to create Grickle cartoons for as long as I can keep breathing air and drawing stuff and Kickstarter is more tuned to single projects or finite endeavors. I long ago started allowing ads on Youtube thinking that the revenue would help in purchasing soundEFX and software upgrades. But man, unless you are PewdiePie I don't think it's possible to really sustain yourself off that. I even added the "Support this channel" on my Youtube page, above and beyond the ad revenue, but again things are structured in such a manner that by the time Youtube and Google have had their bites you really aren't left with much of anything. It's helped but it's far from enough to cover the costs and time I put into the channel.

So here's hoping that Patreon is the answer to allowing me to fund my current work on the Grickle Channel and provide a bright new future where I'll be able to justify turning away freelance work and other paying gigs to spend even more time making more cartoons! If you've enjoyed the animation over the last decade please consider becoming a Grickle Patron!

There's a bunch of perks to being a patron too!

I've set it up to provide an ad-free Vimeo channel with advance access to NEW Grickle cartoons before they appear on Youtube! A behind-the-scenes newsletter will showcase different past shorts with early sketches, storyboards and commentary! Higher tier patrons will get special postcards mailed to their home announcing upcoming cartoons and special events! There will also be a chance at winning original Grickle art! SO beyond supporting the channel you'll definitely be getting something for your patronage!

I'm really excited to kick off this new era of Grickle and I hope you are too!

Climb aboard!
Posted by grickleguy at 10:35 AM No comments:

The Hidden People are WATCHING.

I did a Twitter poll the other week asking what everyone's favorite Grickle character was.

The Hidden People won it by a narrow margin over Principal Skeleton.

So in an effort to utilize this new found data and also to help fund the ongoing explorations of the Grickle universe, I present to you a NEW Hidden People t-shirt! Now available at the wonderful new Grickle Shop! 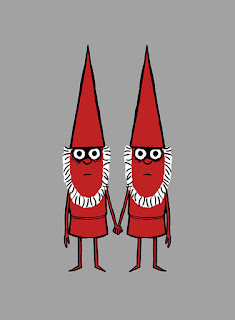 They're watching you. They're always watching.

Posted by grickleguy at 9:37 AM No comments: