The future is here. I've got a lot planned for this year and I'm excited about it BUT I'm not admitting to anything until I'm sure it'll happen. That way no one can hold me to any of it.

Although one thing I will admit to is exciting progress on the Grickle Gardens! For those of you who don't frequent this blog often, the Grickle Gardens is my customized table hockey set that I've been obsessing over the last few months. 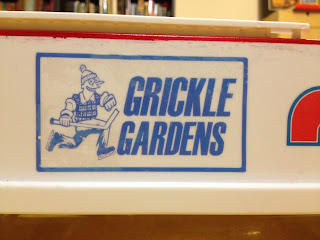 I'm happy to report that the set is once again playable! I've pretty much completed adding all the decals to the boards. On the outside there's an arbitrary looking arrangement of old school hockey logos that I've admired over the years. Some are NHL but others are from the defunct WHA and junior leagues like the OHL and WHL. I even got some NCAA representation on there (Gophers, eh). There's still a little space left on either side that I may add further decals but those precious spaces will only be given to logos that have gone through intense scrutinization and vetting. 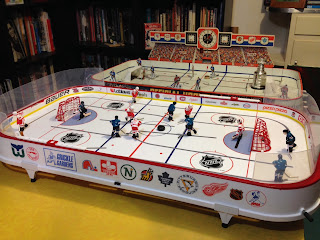 On the inside rink boards I've got a mish mash from Canada, Minnesota and California. I'm especially proud of getting a few specific Sault Ste. Marie businesses (my hometown) on there! Mrs. B's and the old Aurora's are looking good! And just for my wife I made sure to get the Triple Rock Social Club put on, a Minneapolis mainstay! 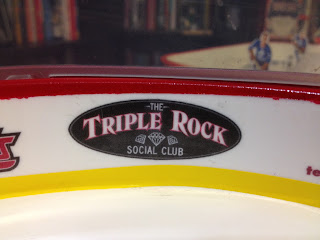 I've also got all the Rangers and Red Wings numbered and named now. It's an all-star cast from across many eras. A best of the best, with a few arbitrary abberations thrown in there. As stated in an earlier post, I went with John Davidson for the New York nets instead of a more obvious choice like Mike Richter or even John Vanbiesbrouck. His mask was too cool to not try and paint. I think he turned out alright, given my relative novice painting skills. 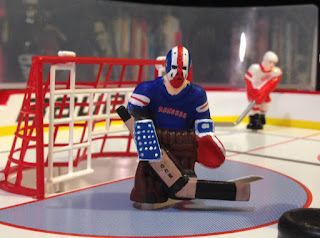 On the other end of the rink I have, who I'm calling, "Moderne Sawchuk" suited up for Detroit. Terry Sawchuk was the obvious choice to me for the best of the best Red Wing goalies. But the idea of trying to paint either a maskless version or that crazy fleshy colored mask he wore in the sixties seemed too daunting a task for my limited skill set. So I decided I'd attempt a fictional updated version of what Sawchuk might look like if he played nowadays. Moderne Sawchuk. 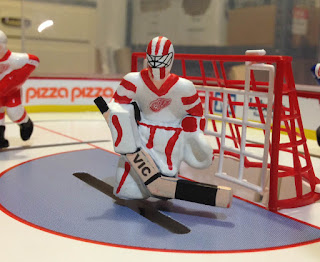 I've played a bunch of games with friends and my son and table hockey has lost none of the charms and thrills I remember from my youth! Such a fantastic game! The layouts and strategy are so much closer to how an actual hockey game is played, than say how a fooseball table relates to actual soccer. Superior, in my opinion.

I've now begun to strategize how to get some real nets with mesh made, along with purchasing some further teams that I'm in the middle of customizing. Next up I hope to put an early 80's version of the Minnesota North Stars on the ice. Dino, Meloche, and bunch of other old familiar faces will soon grace the Grickle Gardens with their esteemed presence. Here's a sneak peek of the work in progress. 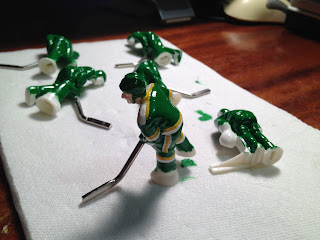 Alright! I've talked your ear off enough about table hockey! I will now release you back into the internet wilds! Thanks for reading!