A rambling, off the cuff, seat of my pants update on anything and everything I've been up to recently.

Earlier this week I posted the first of four Wizard images I created for the wildly successful Idle Thumbs kickstarter campaign. I will eventually post the rest of them there, so keep an eye out. I also mailed off my piece, Late night at the Library, for the Book Show in Paris, France.  Definitely influenced by my recent discovery of M.R. James. Speaking of the man, has anyone watched this (below)?


So good and spooky and wonderfully acted by Michael Hordern. I've never been so entertained by just watching someone eat!

Let's see, what other stuff is going on? My grandpa just turned a cool 91 years of age this week so if you find yourself in Deep River, Ontario, wish him a happy birthday! I managed to contribute an Adventure Time cover last month and I'm busily working away at Laika every day and putting together pieces for a few more upcoming art shows that I'll post about soon enough.

Oh, and did anyone notice that the LA Kings won the Stanley Cup? I'm not a Kings fan but I have to say it felt nice to see them win it after being around for 45 years. I do hope that Marcel Dionne gets a chance to hang out with the Cup in the midst of all the celebrating. 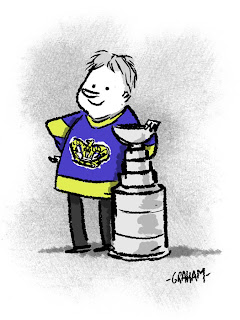