The motorbike that became a computer 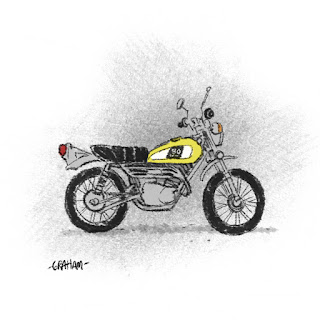 My Dad was really into motorcycles.

He grew up fixing bikes and taking apart motors all the time. He loved it. Very mechanically minded, my father.

When I was 11 years old my Dad surprised me with what I think he felt was a monumental birthday gift.  A Yamaha MX 80cc motorcycle was propped up on its kickstand in the backyard. My very own motorbike! All for me. To learn how to drive on. Change gears. Change oil. An engine to care for.

I liked the Yamaha. I learned how to drive and got to understand the notion of gears. I was aesthetically pleased with it's yellow and black gas tank. We went on a few father/son fishing trips, each of us on our own bike, driving deep into the backwoods of Northern Ontario. Good times. Looking back I realize that it must of made my Dad so proud and happy that his only son was embarking on a tradition of loving motorcycles just like he had.

The early eighties were a time of change. A time when the idea of having a computer in the house was becoming the norm. A home computer. I became VERY obsessed with the idea of owning a Commodore Vic-20 home computer. It was hands down the coolest one out there in my mind. It's warm, off-white, creamy-colored base with striking black keys set it apart from the pack. Plus it was LOADED with an astronomical 5 KB of RAM! It was all I thought about. I pestered my parents relentlessly.  I remember visiting the little computer shop on Queen Street in downtown Sault Ste. Marie and just salivating over being surrounded by Commodore products. My parents could see how much I wanted one.

At a certain point my Dad approached me about one path towards purchasing a computer. With a heavy sigh he explained to me that, if I was willing to, I could sell the Yamaha and use that money towards a computer. He must have hoped I'd say "No way! How could you even dare propose such a thing?"

Instead I jumped at it instantly. No hesitation whatsoever.

His face didn't show it but I'm sure that stung him.

My father listed the bike for sale and within a week it was gone forever. The following week we got the Vic-20.

A REAL computer! In our HOME! It had a datasette for cassettes, a cartridge slot for cartridges, and you could write code on it and everything! Nothing could tear me away from the Vic-20 for the next few months. I'd play Snack-Man until I couldn't see straight. I'd be writing "10 GOTO 20" and all sorts of other magical phrases as I attempted to bend the computer to my will. The Vic-20 was the King of the computing world and I was part of it's royal family! 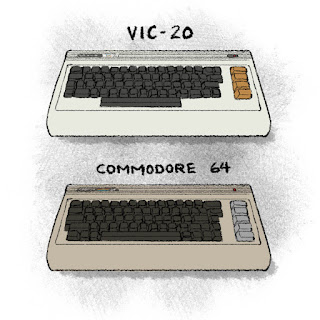 Then the Commodore 64 came out.


The Vic-20 was last year's news. A glorified calculator with crappy knock off games on it. I'd gambled a lifetime of motorcycles on the Vic-20 and lost.  My beige, has-been, archaic computer paled beside the Commodore 64's steely grey tones that just screamed "new supreme power." It didn't have just a datasette, it also came with a FLOPPY DISC DRIVE! It was unstoppable and I was never going to be in a position financially to upgrade to a 64. I was stuck in an obsolete class of computer owner shamed to the shadows of insufficient coding capacity. I could barely muster the enthusiasm to load up Snack-Man anymore on the datasette. Life had turned cold and grey.

But then the storm clouds parted somewhat. A friend of mine down the street got a 64!

I pretty much began to live in his basement on weekends. The world of the 64 was so much more vast and populated than the Vic-20s'! There were games upon games upon games! AND a lot of them weren't even just cheap imitations of arcade hits! They were genuinely built for the 64!

My friend actually didn't have a ton of store bought games starting out. But that wasn't much of a hurdle because he had a connection in our neighborhood. An older kid who was a computer whiz with an apparent disdain for authority and law. Once every month or so we'd make a trip to his house with a stack of fresh floppy discs. And hovering over his shoulder while he sipped a Coke, he'd fill my friend's discs with all manner of the latest 64 games from God knows where. He didn't tell and we didn't ask.

We'd then run back to hole up in the basement and try out the discs. There seemed to be about a 60-40 % success rate with whether a game would load up or not. But there were so many to go through it never mattered much. If it didn't load we'd just move on to the next.


One game that we always held our breath on while it booted up was Karateka. It worked about 50% of the time and it always felt like winning the lottery if we got it to load. The intro was SO dramatic and intense (check out the above Youtube video). It still gives me chills! So many hours of my life were spent just sitting there looking at a comic with the buzzing and ticking of a floppy drive in the background. Interrupted by anxious glances at the screen to see if a company logo or menu had popped up yet. Glorious and formative years.

My Dad still loves motorbikes. He's still very mechanically minded. I've never owned a motorcycle in my lifetime since that Yamaha MX 80. And I'm most definitely still not mechanically minded (just ask my tolerant wife). But whenever we visit my parents these days I do manage to sit down in front of my Dad's Playstation and play many, many rounds of whatever video games he's into lately with him.

It's not exactly a father/son fishing trip but it's a trip of sorts I suppose.