This short blog post is solely devoted to the fact that I've got a new cartoon up on the Grickle Channel today. It is the longest short I've ever made thus far in the decade or so I've been doing this. It lived in scribbles and doodle and in my mind for well over 4 years before I finally completed it. It's creepy. It's scary. And it's just in time for Halloween. Enjoy.


Tell your friends and enemies out there! Spread it around, internet-style!
Posted by grickleguy at 9:30 AM 2 comments: 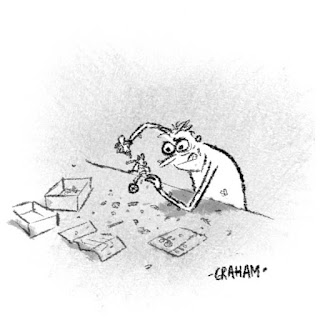 I was thinking about models the other day.

The models you build. Not the ones that strut around on catwalks and purse their lips for the camera.

Models that come in prefabricated pieces in cardboard boxes. Accompanied with step by step instructions on how to take it to it's final destined form.

I loved having models.

I was lucky enough to hang around with an older kid in my neighborhood who was about 3, maybe 4 years older than me. He introduced me to music. I remember sitting in his basement marveling over album covers of KISS and Alice Cooper and listening to stuff that was 'cool'. He had a skateboard. I was never any good at it but I sure liked trying.

He was also into models.

Heavily into models. And he was super good at building them. I remember he had this HUGE aircraft carrier he'd built that I could never stop looking at. He put all the decals in the right spot, it was perfectly painted. An exact miniature of the real thing.

I'd sit with him while he worked on some old WW2 airplane or tank. He'd be carefully following the instructions and bringing this amazing vehicle to life. He had a box of 'extras'. Pieces that were left over from previous endeavors, that I could mess around with. I loved just grabbing random bits of whatever I fancied and applying way too much glue to them. Building some unknowable thing until I deemed it was done. As long as there were no instructions to follow, model building was awesome. I never tired of that.

At a certain point my older friend and his family moved away. It was a sad day because our families were good friends and we spent a lot of time with them. As sad as I was to see my 'mentor' leave I will admit I was stoked to inherit his massive aircraft carrier! It immediately went up on top of my bookshelf where I looked at it closely every day. It was the object that inspired me to venture into a world of eternal torture. Building my own models.

For the next three years or so I was constantly buying model kits and attempting to build the things the front of the boxes promised.

I don't know that I ever completed a single one.

I just couldn't follow through on the instructions without messing up some major step along the way. I never had any patience to wait to apply the decals until the end. I was always irreparably gluing some wrong piece to another because I'd misinterpreted the illustration in the instructions. My models seemed to always culminate into a glue-coated Katamari ball of shit that didn't look anything like the well-lit photograph on the box. But within a few weeks, the frustration would always dissipate enough that I'd convince myself that "Yes, I could totally build that Husqvarna dirt bike with all the complicated wiring and motor parts". And off I'd go again down a dark, dark, road of glue and self loathing.

The ultimate end of my modeling days arrived when I came into possession of a huge X-Wing fighter kit. I wanted that ship to be displayed on my shelf SO BAD. I willed myself to truly follow the instructions and take my time to make it PERFECT. It was going to rival the aircraft carrier for sheer awesomeness in my room. But as I put it together the usual patterns emerged. My frustration built. And as I began to realize that I had, yet again, effed up the instructions and severely compromised my ability to complete my X-Wing fighter in the manner it was supposed to be done, I lost it. In a complete rage I scooped up my 3/4 finished piece of shit X-Wing and stomped over to the garbage in our kitchen and, in front of my parents and sister, THREW it forcibly into the trash. Immediately thereafter exploding into tears of anger and utter sadness that I just couldn't make that X-Wing happen. That was the last the model I ever attempted to make on my own.

After that I focused solely on drawing. And hoarding as many pre-built Star Wars figures and vehicles as I could throughout my childhood.

I stayed away from models.

Until now. I recently purchased a Stiga table hockey set that I'm dying to customize. Put decals on. Paint. Make it nerdrifically pretty! This will be the first time, since those dark days of the X-Wing, that I will attempt to enter the world of model making again. I'm filled with an eagerness and anxiety I haven't known in a long, long time.

I really hope it doesn't end with my slamming the entire set into our garbage.